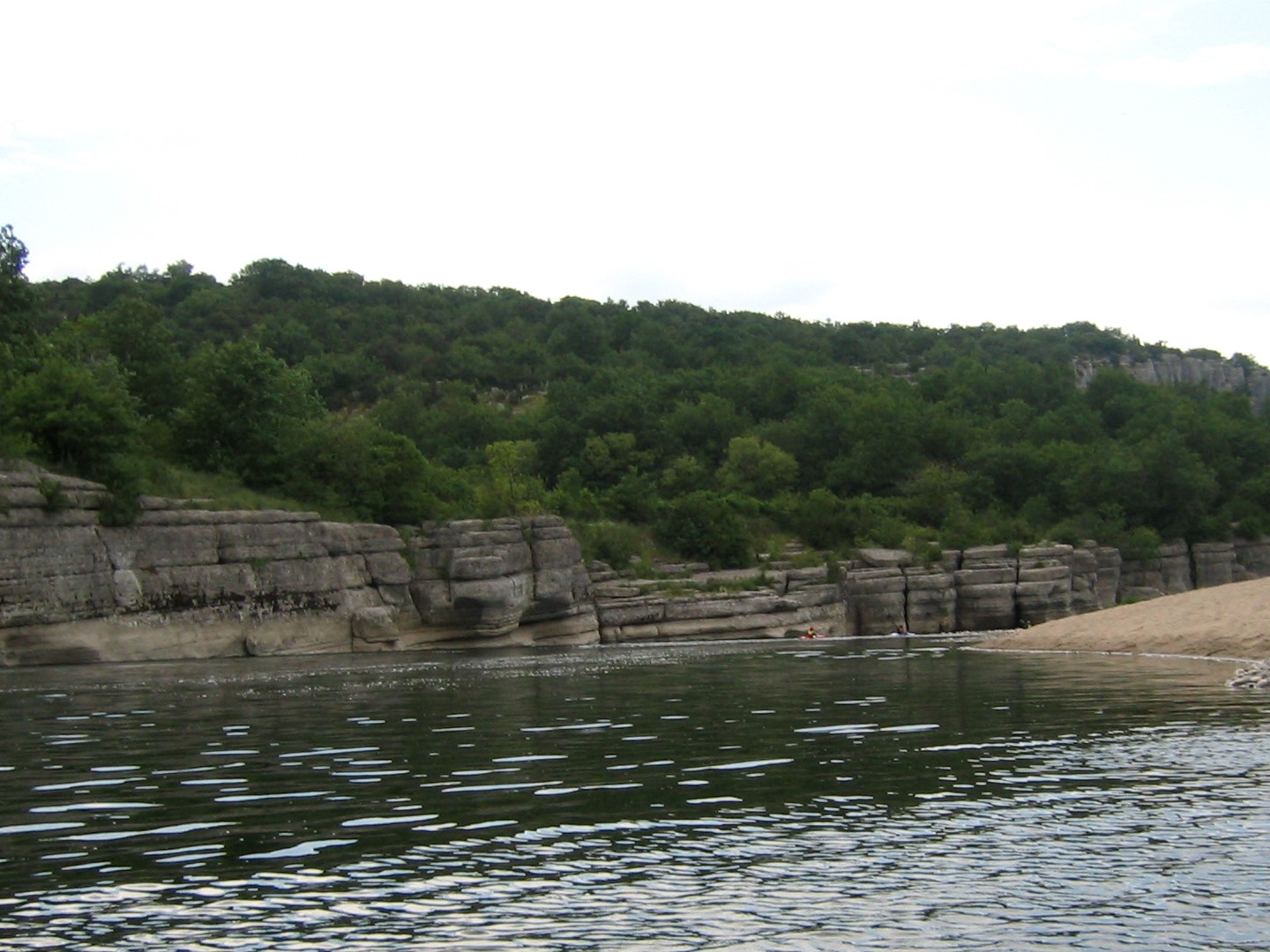 It all started off by squashing Jacho into the rear of our vehicle which was to be driven by the Bionic Man, Mike.W. Then on the ferry we squashed Dan (6’6”+) into a small bunk bed in our cramped 4 berth cabin with 5 of us in it. This went on all week squashing gear into canoes for the day trips & I was definitely squashed into my thick anti bump wetsuit, so much for coming back brown, more like half dissolved.
We had our secret weapon on board, Dan the snorer & half a ton of wet festering gear which we thought customs would be unwise to search on our return. On the journey both there & back we stopped off at various municipal loos & tool gates just so Dan could say:

(Can I have a receipt please).

The slalom course at St Pierre de Bouf was brilliant & all the guys would practice their impressive “wow” techniques. One guy there had even perfected a summersault (you could see the others going green with envy, me for another reason).

The next day we set off to Vallon & set up camp, it was great to be in the big outdoors with the murmur of voices & spectacular water birds dawn choirs. There was also a group of exceptionally loud foreign guys bantering with some ear piercing Latin senoritas all night.

The river & gorges were spectacular with some landmarks such as cathedral rock & windy corner stood out from the others. On one stretch there was an optical illusion where the lines in the rock made the river appear to be running downhill although the water was dead flat. Unfortunately for the guys the one day we passed the nudist beach it was dull & overcast & there was nobody about. Birdwatchers, however, could see herons & eagles etc whilst other wildlife spotted was a terrapin & a couple of beavers ( I’m glad Chris saw them too, otherwise I would probably be accused of seeing a big rat).

The Rapids seemed to be of all verities from weirs with shoots to flat rock slides with bumpy bits, massive rocks & flows which liked to take you into undercuts & pinning. They all had names like Charlemagne, Air France & the infamous La Dent Noir – Black Tooth Rapid. It was fun watching the tourists in the opens squealing as the descended the rapids. The bit I liked best was the concrete shute in the middle of the weirs, all the more exciting & probably best if you don’t look where you’re going first, usually into big white frothy stuff, but all safe so I was told. The French are very canoe friendly & build these shutes or glissers as they call them at most weirs & on our final day on the Ardeche just before we got out was the finarly a large shoot down the side of the weir at Ruoms ‘Geronimo’.

Many thanks to Chris for staying at the back & watching out for me & well done Jacho the guinea pig with eyes shut as he’s lead down the rapids “left, left, oh sorry no not that left.”