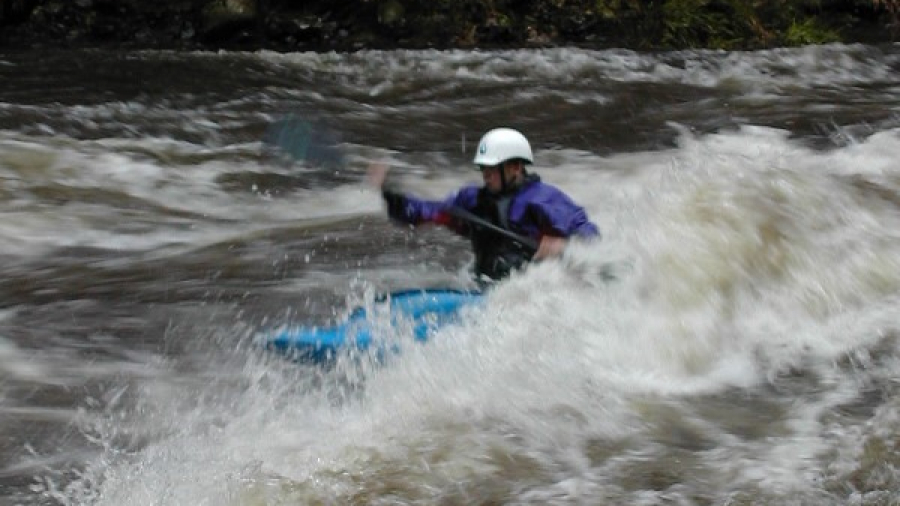 It was raining; nothing beats changing in the car park in the rain. I must buy one of those tents that go over the back of the car, inbuilt heating, and pile carpet.

The height gauge on the web was at 1.5 white marks – no problem. On the webcam, it had been at 1.5 marks all week – no problem. The water was level with the ledge – fantastic. Ideal height, the shuttle went well with Doug kindly doing the return journey. The briefing did, let’s go, plenty of throw lines. These will be needed later.

Hey, there is loads of flow and the play waves are great. Practice crashing into eddies. Why don’t more people do this! Loads of ferry gliding, even reverse ferry gliding going well. Most of us OK at the moment.

Reached the Webburn and there was loads of water. We all decided to have a run down it, which was limited by a fallen tree about 200 metres upstream. The river had enough water to be fun and not too bumpy. Two runs later and we are all having a great time. Oops – fell over the eddy line at the Webburn, neat roll up and on we go.

Not much of a feature this time, loads of water, where has it all come from. We should have realised what was to come.

Keep left, all through with no problems.

Wave trains very bumpy and we are all having fun.

Washed out step feature and the flow is pushing hard onto the undercut. All round OK. Stop for lunch. The water level is rising quickly, at least two inches in the lunch break. Oh – this is going to get busy.

Keep left and avoid the nasty eddy on the right. I have been there so I am extra cautious. Everybody made it through. We stop in the eddy on the left to admire the eddy line on the other side. An impressive 18 inches high.

In the next section Rosie explored the countryside and Ross stopped to help out. Then the fishes beckoned. The boat was fine and Rosie was re-united with it further down the stream.

Then Dave did it better. He parked up between a tree and the bank, with the bows carefully positioned to stop him drifting off. The only problem was he couldn’t get out. Dave then bailed out (for the second time if I remember correctly), and the party began. As you can see from the pictures below there were suddenly lots of vultures interested in the bounty from the stricken vessel.

Darren was nominated to free the boat as he had done a White water rescue course (the one he plucked Graham from the jaws of death and deposited him into Prescott’s arms) and Chris was the senior person so Darren it was. Over the edge on a throw line and onto the boat. After much huffing and puffing the boat folded neatly up and popped free.

Dave at this point reckoned he would walk home pulling his boat behind him. Now it got exciting so Flic takes over the story.

Was ummmm… more like the grade 4 rivers found on the Zambezi! Where had the features gone? Third drop with its little recirculating eddy? Well, it had been replaced with a monstrosity of a ride! The third drop had become a humongous wave, most walked around (WHIMPS!) Flic, Darren, Luke and Peter ran it! Flic took first decent, paddling hard through the wave train and flipped high into the air on the wave before the third drop.  Hard into the eddy and then off downstream to rescue the swimming father. Yup Peter swam!

The wave was pretty sweet, it was white and bouncy and Luke, Darren and Flic were entertaining to watch as they proceeded to take a thrashing on the wave.

Whilst we were all stood around watching the lads and Flic play on the wave, there were a crack and rushing sound from behind us. It sounded just like rainstorm coming through the trees, I turned to see a huge tree falling, crashing through the valley and lying just where Dave had walked 2 minutes before, landing about 10 feet from us.

By this stage Chris had had enough and we were all back in out boats in ultra-quick time.

The deadly, dangerous Holne Weir was up to its usual tricks, it was gnarly today and nothing was going to come out alive! The very weary worn out ACC chose a wise option to portage this one

Well in my (Flic’s) opinion it was at the best level I had ever seen it! It was, of course, the torturous Anvil!!!! Today it was going off, totally huge, paddlers were busy throwing blunts and entertaining the passers. I had a couple of goes, but I was so tired I shortly retired to the car park.

By the time we had reached the bottom of the river the level was up to the chute and approximately 5 feet higher than when we got on 4 hours earlier!

Back at home the next day I checked the webcam. The water had come up through the day and had completely subsided by the next day.

Take the rescue kit. Practice, practice and practice. Do the hours on Adur low water. The pace of the river took most of us by surprise. Always head for the top of an eddy otherwise you miss it. Penny – Don’t catch hold onto trees, you will swim, even if the triple drop is around the corner. A big thanks to Chris for a great trip that was a bit more than his level 3 training required.

Peter – memories of the trip