6 am and I heard the voice ‘You better get up, Bruno is already outside’. Not the first words I wanted to hear, but here he was and I only had a few minutes to jump in the shower and get myself downstairs, by which time Wendy already had the coffee ready and the bacon in the pan. A half-hour later my gear was loaded and the boat on the roof. Just have to wait for Jacho to arrive. Well, shortly after, Jacho did arrive and we completed the loading and were on our way to Henley.

As we pulled in to the car park at Henley, we were the last to arrive, the others were already more or less unloaded and changed. After unloading and checking we had everything we needed the drivers did the car shuttle to Hurley (about a 40-minute turn round).

Once the team was reunited, Trevor gave a briefing and we all launched and were on our way with the sun shining and the wind in our faces. We paddled past the regatta course and into some very scenic countryside, with plenty of luxury properties and lots of other craft to keep out of the way. It didn’t seem that long when we stopped for lunch and I thought it might be a good time for a photo opportunity. 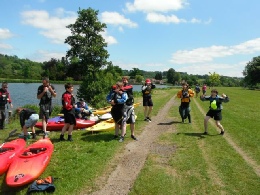 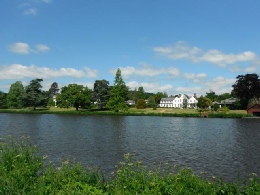 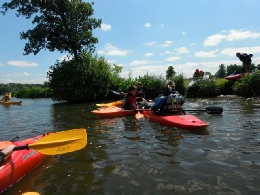 The afternoon continued with a couple of portages and plenty of scenery until we sighted our camp side. We continued for a short distance to the Hurley weir where a number of people had some fun in the moving water. 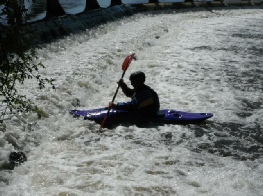 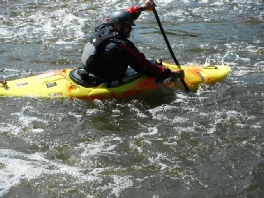 The local rescue team arrived. They might have heard that Sam was practising in the moving water. 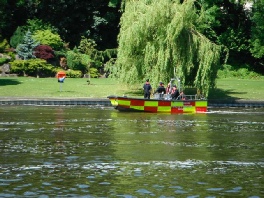 Sunday dawned and following a hearty breakfast including hot dogs and the customary shuttle run, we set off for Maidenhead. Sunday’s weather was not as bright and warm as Saturday, but for those of us, that forgot to apply sun cream the day before it was probably a good thing. The scenery was just as good as the previous part of the trip and most of us had the new experience of travelling through a couple of locks instead of having to transport the kayaks around.

We also had the added excitement as one member decided he was going to seal launch down the steps adjacent to the lock. This seemed to capture the interest of some passers-by and was captured on video just in case I could sell the footage to the ITV.

After a lunch stop at Marlow, we had the final leg of the journey to the finish point at Maidenhead and a very noisy return trip to Worthing (due to the canoe straps on Bruno’s car). 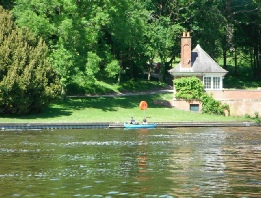 Following the play session, we paddled back to the campsite and made camp for the night. 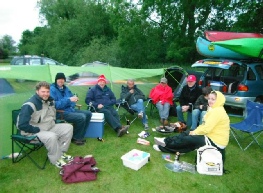